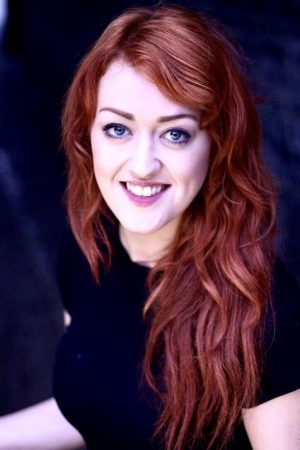 Arklow native Amy  has recently returned to Ireland having finished a 9 month UK/Ireland tour playing “Natalie” in Roddy Doyle’s ‘The Commitments’. The tour followed her 18-month West End run in the Palace Theatre, London, covering and playing “Natalie” and “Bernie”. She is a familiar face with Arklow audiences, having taken lead roles in a number of musicals with Avonmore Musical Society, including “Holly”(The Wedding Singer) “Wednesday Addams”, The Addams Family, Irish Premiere) and “Dorothy” In The Wizard of Oz, for which she was runner-up for Best Actress at AIMS 2012.

Amy graduated from the Liverpool Institute For Performing Arts (LIPA) with a B.A. Hons Acting. Her roles while at LIPA, include “Marya” (The Government Inspector), “Rosalind” (As You Like It), “Gilda”, “Mrs. Tilly” and “Flynn” (Loveplay), “Ursula” (Sweet Charity), “Lead Singer” (They Shoot Horses, Don’t They?) and “Mole” (Wind in the Willows). Theatre credits include: “Silly Girl” in Festival Production’s ‘Beauty and the Beast’, “Ariel” (Footloose) with Stillorgan Musical Company, “Pitti-Sing” (The Hot Mikado) with HXT,  “Ado Annie” (Oklahoma!) in the National Concert Hall, Dublin, “Woman 1″ (Songs for a New World) , “Rubella De Zees” (Cinderella, Rock and Roll Panto). She appeared on BBC’s “Over The Rainbow” in summer 2010 and progressed to the final 50.  Amy also performed onboard the Legend of the Seas as Girl 1 and Vocal Captain with Royal Caribbean Cruise Line Productions.